The Region of Murcia sits in the South East corner of Spain and is perhaps best known for 2 of its most famous exports.  Firstly the “Campo de Cartagena” produces an enormous quantity of fruit and vegetables which end up in UK supermarkets. Secondly the regions boasts 3 current UCI world tour cyclists (Alejandro Valverde, Luis Leon Sanchez and Jose Joaquin Rojas).

Whilst audax are a relatively new addition to Murcia’s cycling calendar their popularity is unquestionable.  The Murcia Randonneurs club started organising Audax in 2018 and in its 2nd year was ranked 43/600 by the Parisian Audax Club in terms of total distance ridden.  Their 2020 calendar includes 13 events ranging from 200 to 1200 km. We joined the club, along with 60 other riders, on their 200 km event in February 2020. 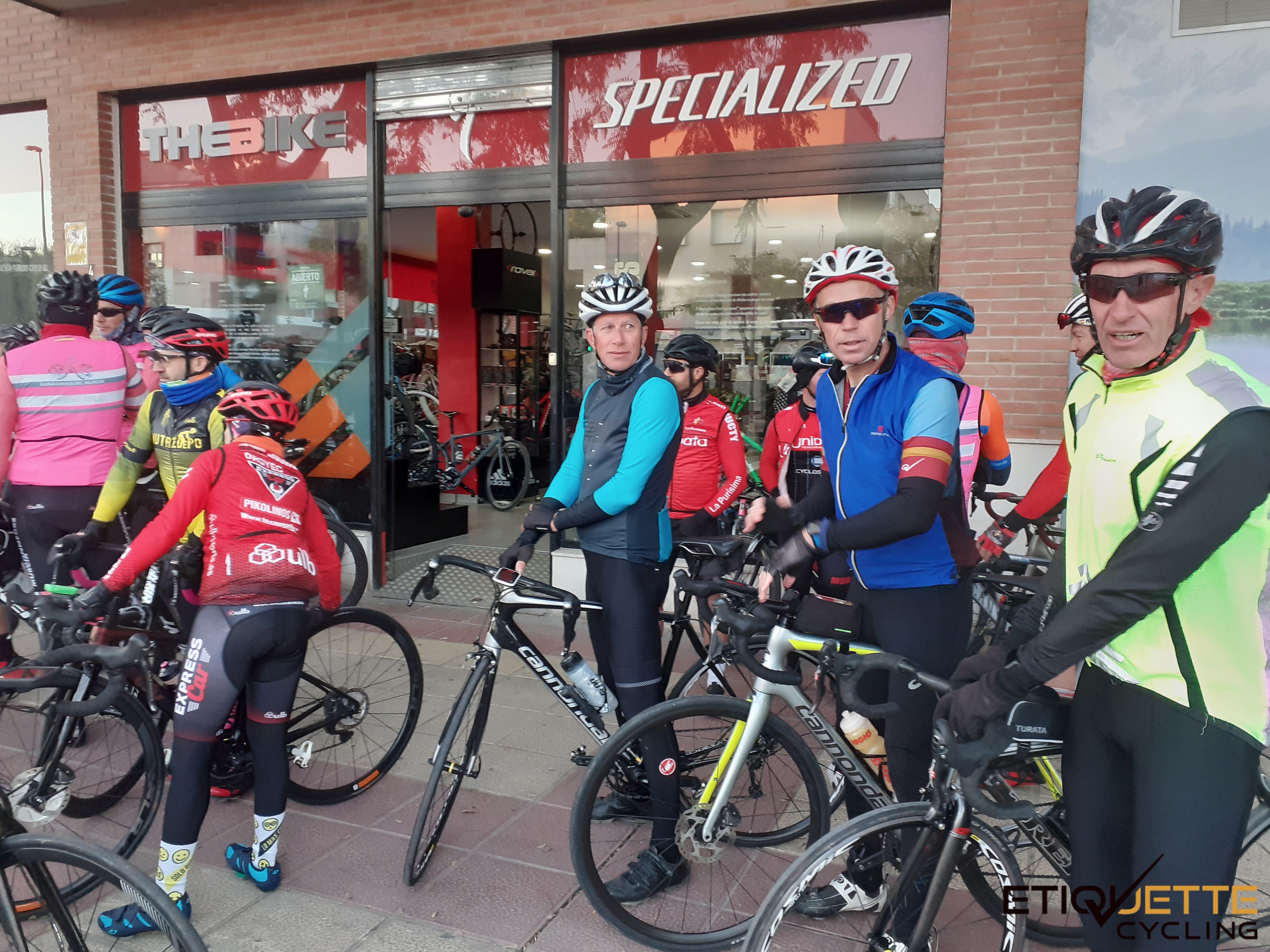 The event started at a Bike shop a few kilometres from the city centre and the shop’s resident mechanic was on hand to help with any last minute mechanical issues.  Check in was straightforward and we were duly presented with our route card. Around 60 riders had registered for this event which included a number of British expats.  After a few photos were taken we were on our way shortly after 8am. 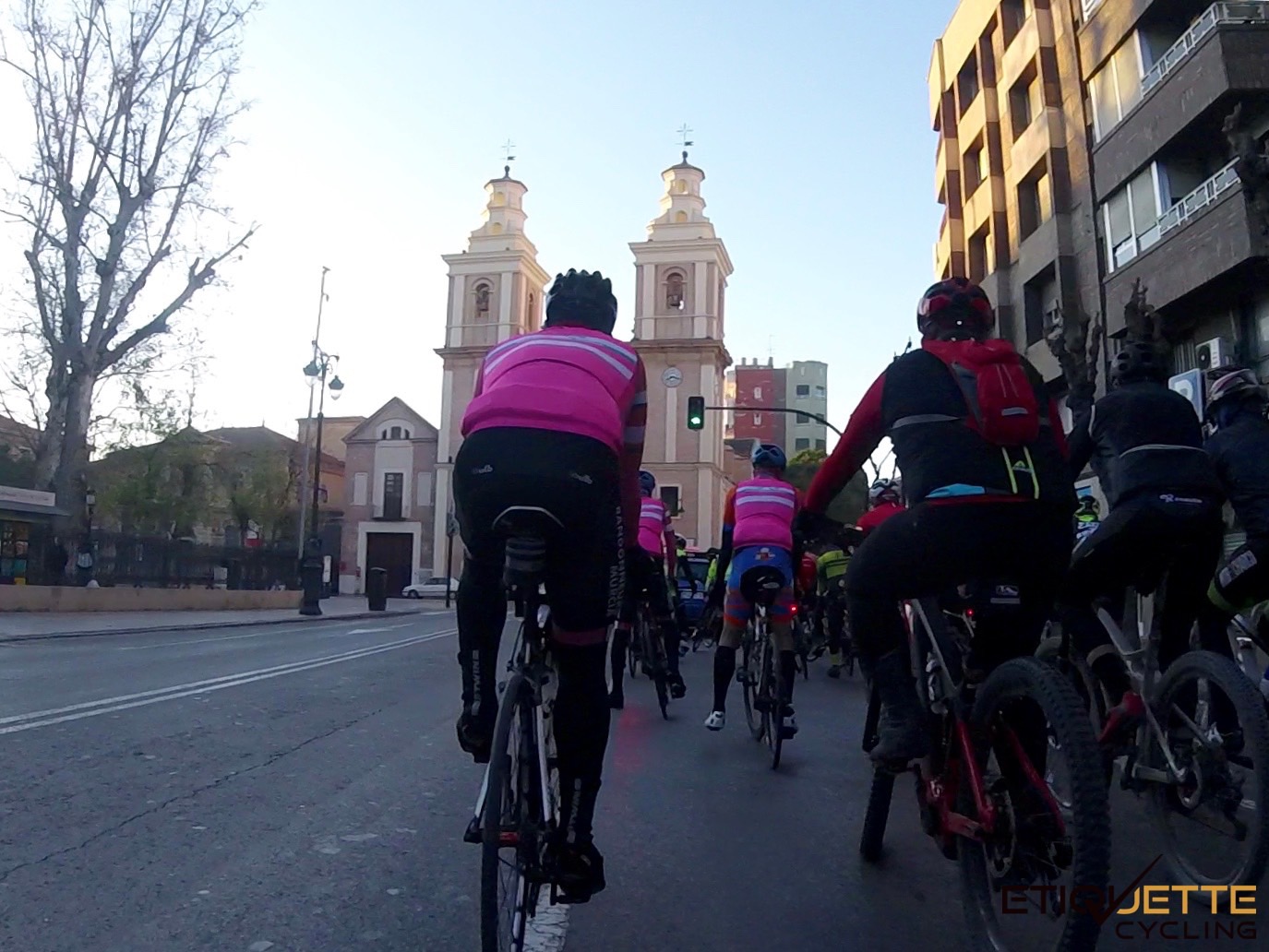 The first 10km of the ride was punctuated by frequent sets of traffic lights which held the pace down and kept the group together.  At such an early hour the sun wasn’t able to penetrate the city’s tall apartment blocks and temperatures were hovering around 3 degrees.  As we left the city and moved onto open roads the pace soon increased and the peloton was racing along at 35-40 km/hour. Although the pace seemed a little fast considering the long day ahead we were reluctant to lose the benefit of being dragged along by the peloton. 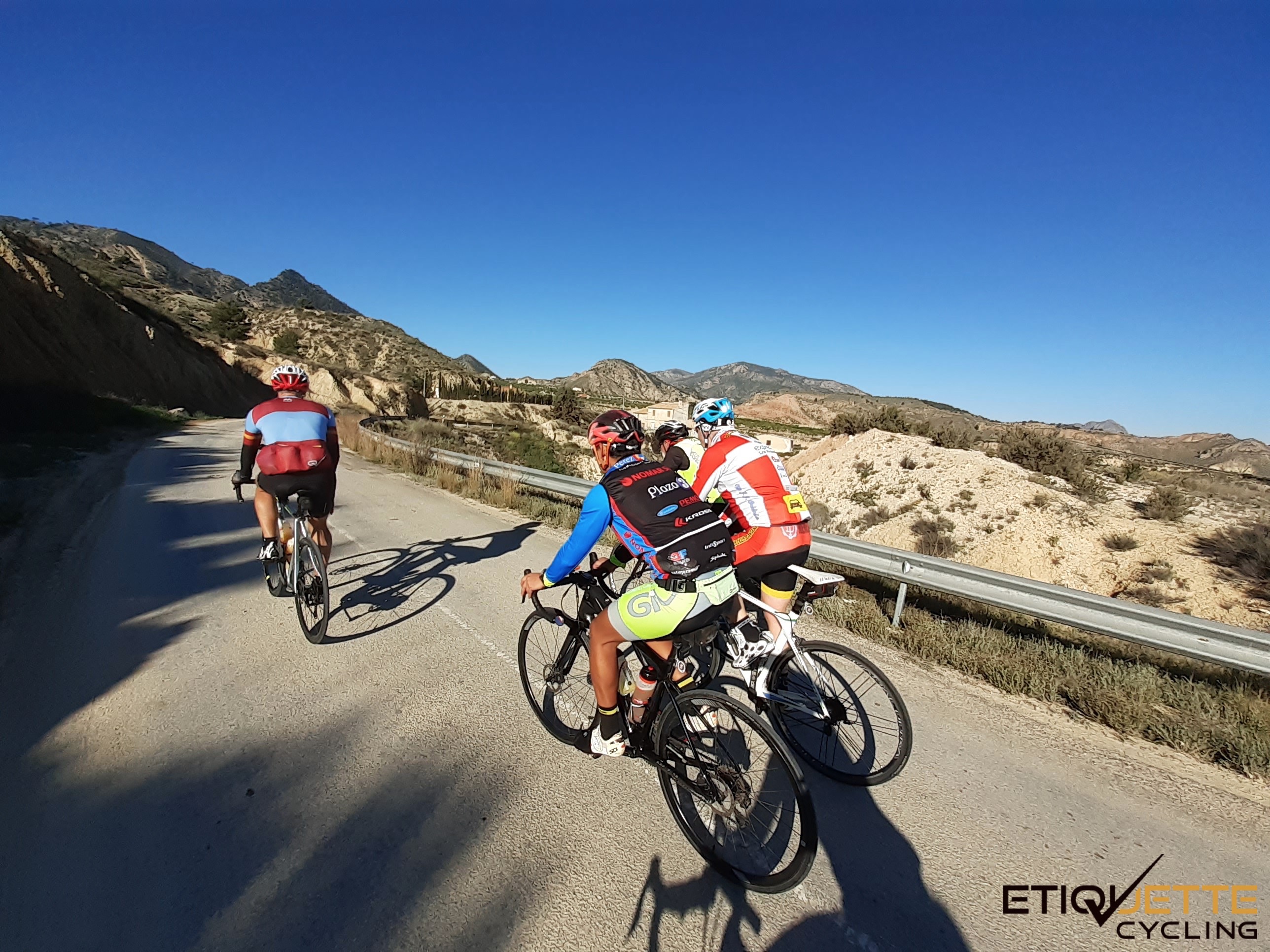 After some 30 kms we left the urban sprawl behind us and passed through the spa town of Archena and the landscape changed dramatically.  Next we entered the stunningly beautiful Ricote Valley. As we hit the first climb of the day the peloton broke up into smaller groups and the rising sun made the temperatures much more pleasant.  Our first control was a small cafe in the Ricote Valley after 45 km. Most riders at this point stamped their route cards, shed some clothing, and moved on rapidly without stopping for refreshment. 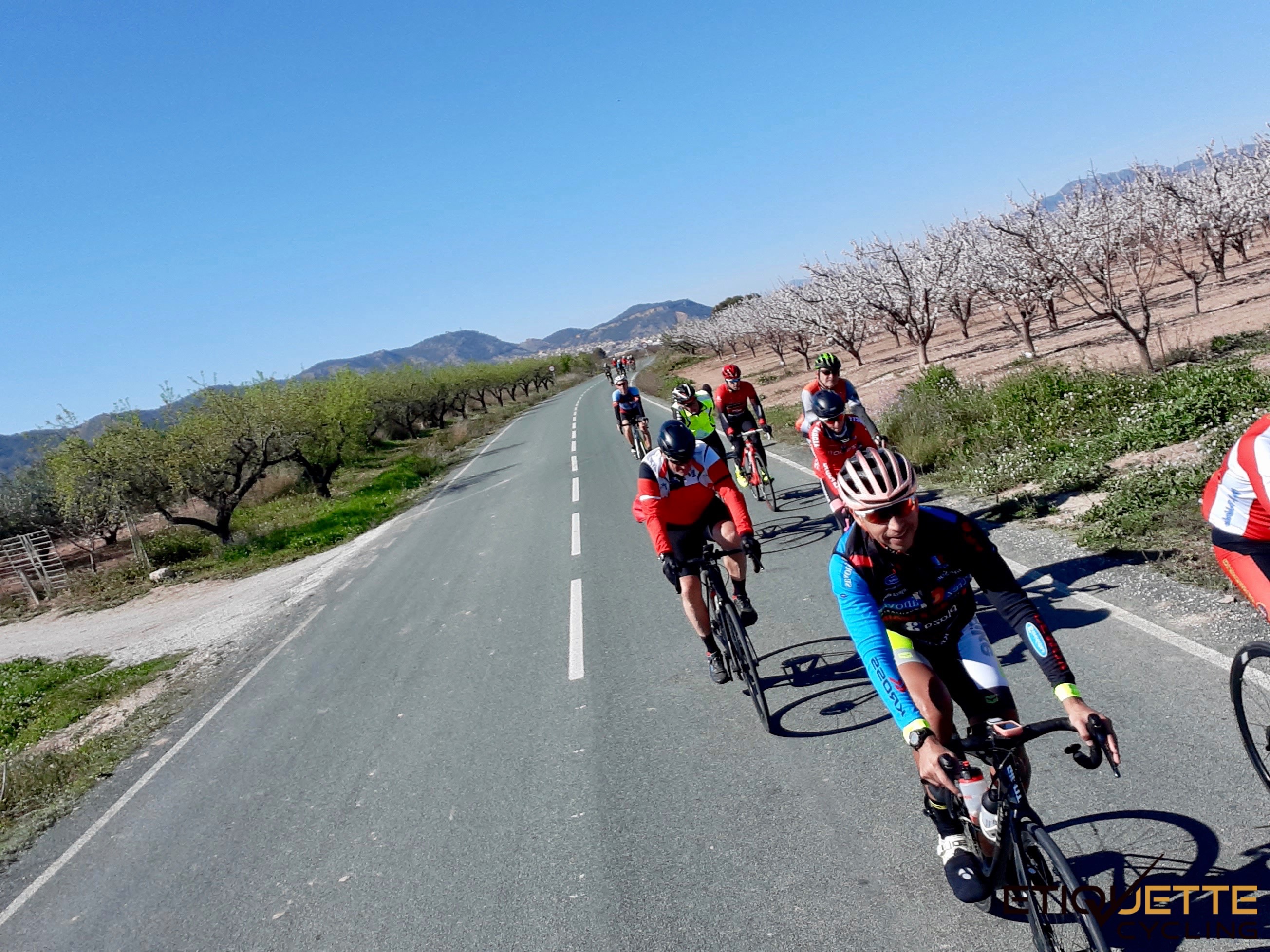 Throughout the next section the landscape opened up as we headed South towards the town Pliego.  This event takes place during the “Floracion” or blossoming of the Almond and Apricot trees. The blue skies and stunning backdrop were breathtaking and our group, which now numbered around 20 riders, was effortlessly eating up the kilometres.

We passed the halfway point just after the town of Pliego; however, the most challenging sections of the route were still to come.  As temperatures increased we started the first significant climb in the “mythical Valley of Malvariche”. Again the group broke into smaller sections as we tackled the hour long climb to the mountain pass at Alto Casa de Frances.

A short fast descent took us to the small village of Zarzadilla de Totana and the 2nd control at 120km.  The group, in need of refreshment, swarmed upon the local cafe where the owner protested that he should have been informed that 60 cyclists were coming for lunch.  Nevertheless an endless stream of bocadillos, coffee, and beer emerged and we were quickly on our way. 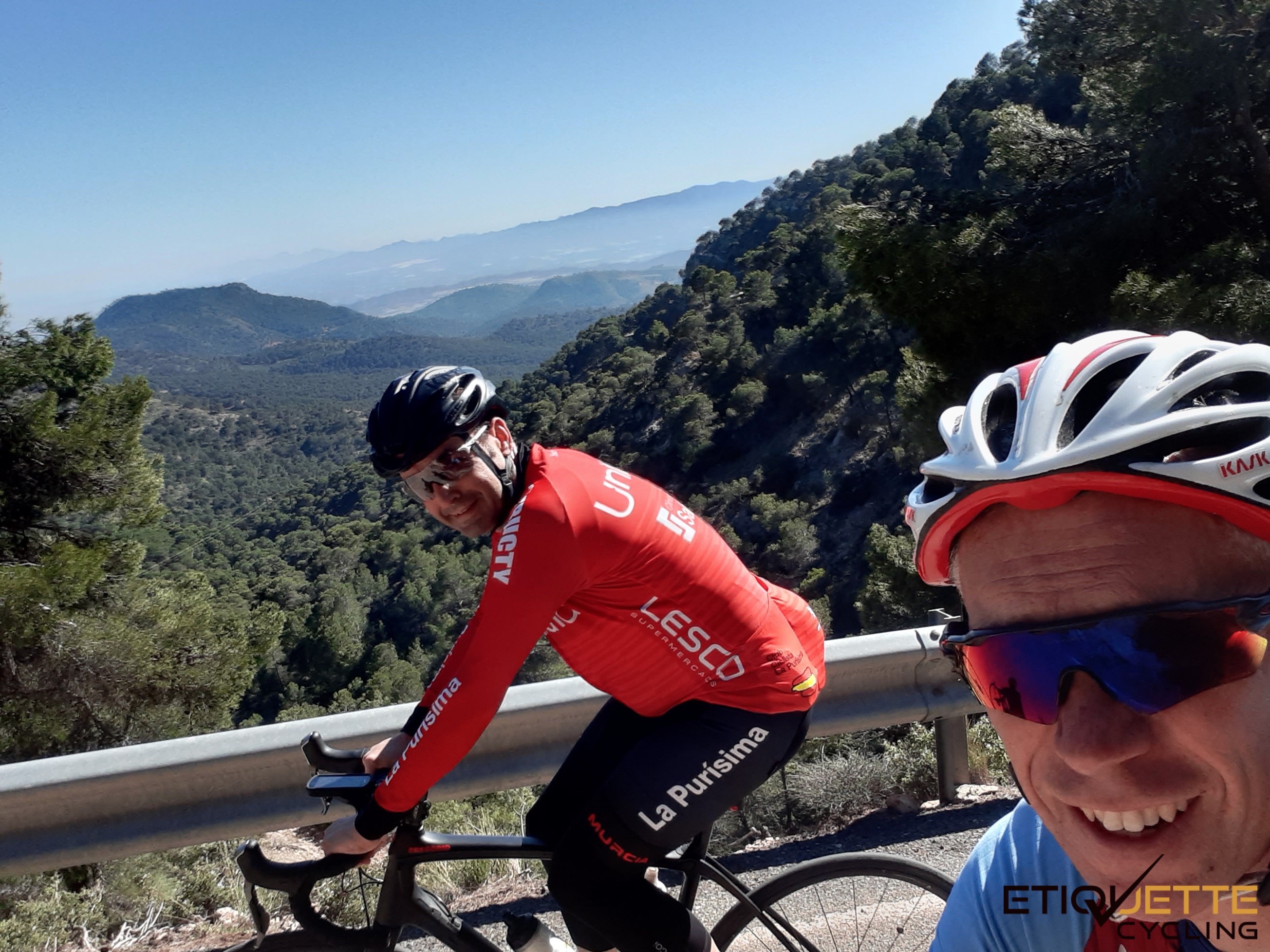 A further short descent took us to the foot of the Sierra Espuna Natural Park and our second major climb to the Collado de Bermejo which sits at 1200m above sea level.  Just a week earlier we’d been at the same spot to watch the pro riders in the 2020 Vuelta a Murcia. Fatigue was now taking its toll and the 1000m climb took us around 48 minutes; the Strava record on this climb is held by Steven Kruijswijk at 18 minutes.  Although the summit can be quite inhospitable clear skies prevailed with little wind. Consequently most of the riders took the opportunity to relax and take in the view before continuing.

Upon leaving the Sierra Espuna we passed through the small town of El Berro we rewarded ourselves with another rest stop.  In this part of Spain every village will have a bar/cafe in which you can always obtain inexpensive refreshments. Our 3rd control at 173 km was reached at 1638 where our route passed through the town of Pliego for a second time.  Whilst taking the chance to refuelling at the local bar we were befriended by a group of locals who had been enjoying the owners hospitality. They were insistent we should stay to watch the town’s carnival which would start imminently.  However, with a little over 2 hours of daylight remaining we needed to press on.

The remaining 40 kms back to Murcia city was largely uneventful.  On reflection we were probably becoming complacent about the quantity of smooth quiet roads and the beauty of the rolling rural countryside. This final section was largely downhill which helped to alleviate the accumulated fatigue of the day’s efforts.  The route finished at the Hotel Nelva in the city centre where route cards could be stamped and submitted. The hotel also provided free use of shower facilities for the participants if required. 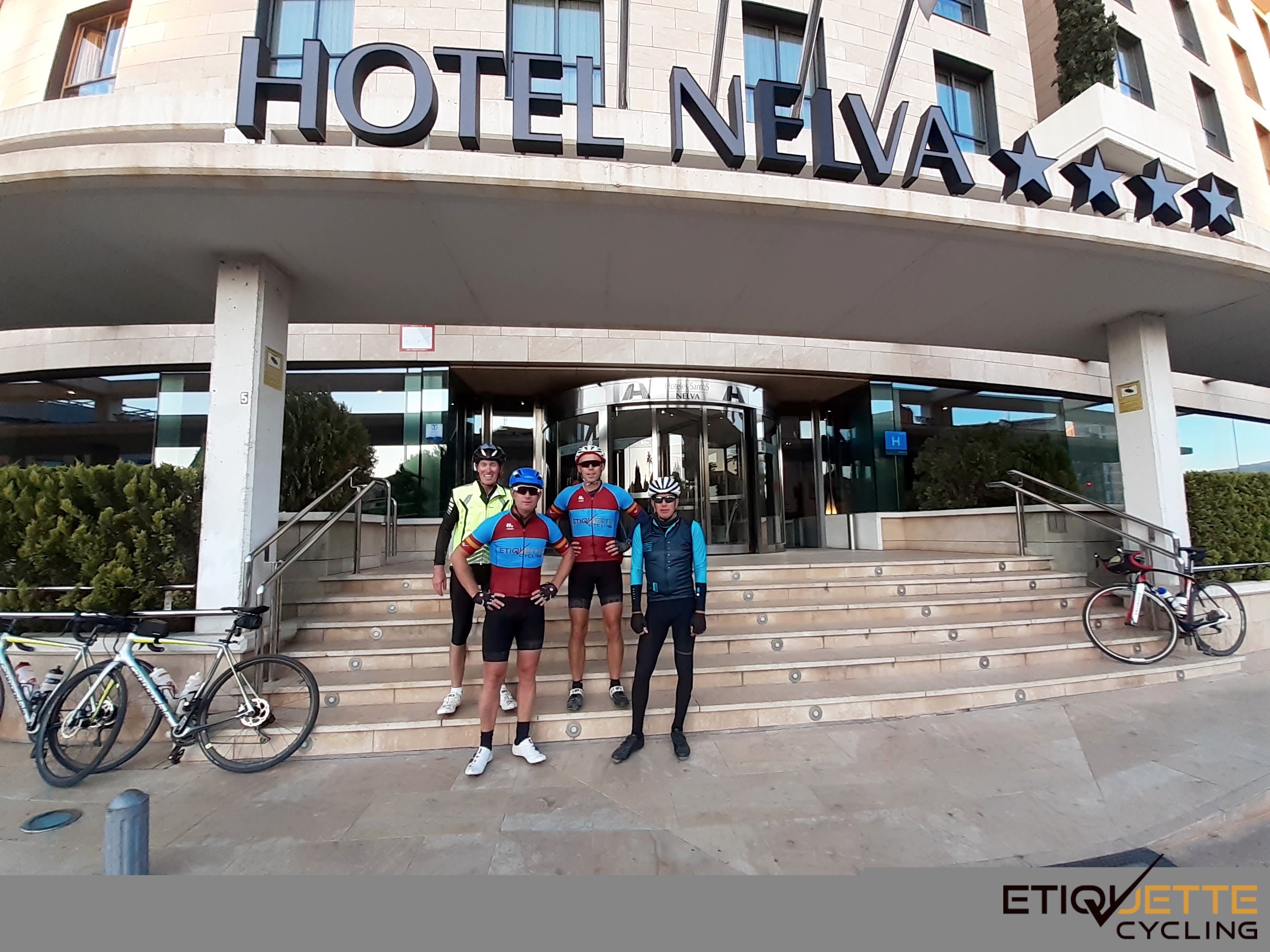 With distances ranging from 200 to 1200 Kms The Murcia Randonneurs Club have something to attract all levels of cyclists. However, we proved that this route, probably one of their most impressive, is achievable with a modest amount of training. With that in mind we're collaborating with the organizers to deliver a fully supported cycling holiday package aimed at helping you to complete your first 200 km audax.